Every day, SVP of Talent Grant Neckermann talks to candidates who want to change the world. We flipped the script and interviewed Grant about what brought him to Syapse, why change is good, and his proudest moments during an exciting period of growth. 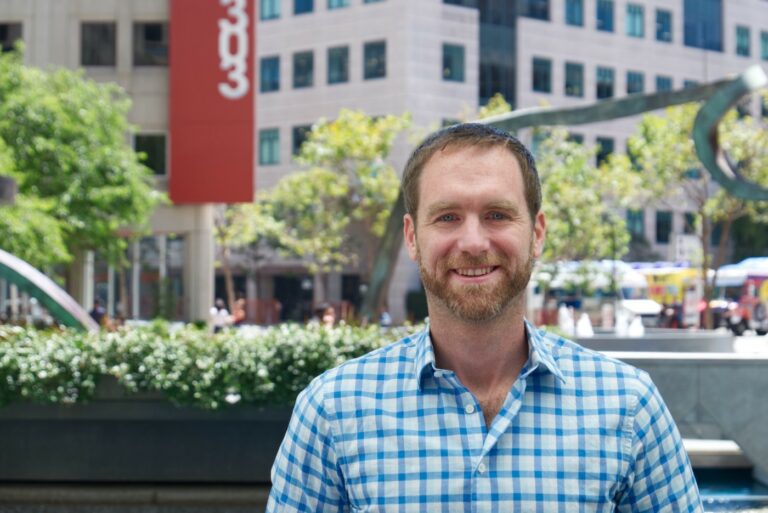 How did you end up at Syapse?

The first time I ever heard the name “Syapse”, I was sitting on a beach in Mexico. But backing up — I got into recruiting by chance after moving from Indiana to Los Angeles on a whim and worked with some of the best recruiters in the business at an agency for two years. From there, I started my own business, mostly so I could build what I wanted and run my own life. I did that for six years, living on the beach in Malibu. I spent as much time in the ocean as at a desk.

My wife and I reached a point in our careers where we could leave to travel the world for a year. Twenty-two countries in eleven months. Learned “hello” in 14 languages. Most of them I still remember… Which brings us to that beach in Mexico. My phone rang, and it was a close friend of mine who worked at Syapse. I was pretty committed to going back to the agency world, so I told her I wasn’t interested in a job. But then she told me a really compelling story about the work Syapse was doing to modernize cancer care by bringing data into the equation. I came on part-time with the intention of starting my agency back up. It took me 18 months of contracting before I finally admitted to myself that I was totally, completely, emotionally invested in Syapse.

In parallel, it seemed like cancer was hitting closer to home all around me. An amazing young lady in my life was diagnosed with advanced stage cancer. Precision medicine and targeted therapy ended up saving her life. At the same time, one of my best friends was diagnosed with cancer and passed away not from the cancer, but from the chemo. He literally rang the bell and walked out the door of the hospital cancer-free, and then passed away from complications three days later. So in a short window of time, the Syapse mission became very personal for me. I don’t ever wake up and look in the mirror and wonder why I come to work in the morning.

As a recruiter, what part of the Syapse story resonates the most with candidates?

Not to sound jaded, but I think a lot of people in the tech community talk about “changing the world” and making a difference, but in reality what they’re building just doesn’t have that impact. What really resonates with candidates I talk to is the fact that we can tangibly show them the connection to their family members, their friends, people they know with cancer. This is the future of healthcare. I firmly believe that our kids won’t call this “precision medicine”, they’ll just call it “medicine”. I think that story resonates with people and ultimately, I think it’s refreshing to hear about a company that actually means it when they say they are “mission-driven”.

What do you think is the biggest challenge Syapse is trying to solve?

You can’t underestimate how hard what we’re doing is. We now live in a world where data basically makes all of our decisions: it buys stuff for us, it helps us get to work, it decides where we eat dinner, who we spend our time with, in some cases even who we marry. Yet for some reason, this hasn’t carried over to healthcare. It’s not because we don’t want to use data in healthcare; it’s because it’s an insanely hard problem to crack.

In adtech and fintech and many of the others “techs”, a machine generates the data. And when a machine generates the data, it’s usually clean and structured and easier to work with. When a human generates data, which is overwhelmingly the case in healthcare, well…it can be a mess. That’s not the fault of any healthcare provider. There’s a thousand ways to write something down. We’re not talking about numbers or binary ones and zeroes. We’re talking about really complex clinical notes. So how do we take that and turn it into something usable at scale? That’s the incredibly hard challenge we’re trying to solve.

Is there a narrative or story about Syapse that you wish people told more often?

That change is good.

We went through a period where the company was in transition. There was a lot of commentary around, “There’s so much change going on”, and I remember thinking, well yeah, that’s what we’re here to do. We’re here to change medicine. We’ve been at this for ten years, and if we haven’t changed anything about our approach since then, we’re not doing this right. Cancer care and precision medicine look really different than they did ten years ago.

The people who need to be here, the people who are successful here, are the people who say, “Yeah it’s changing. Of course it’s changing. Why else would I be here?” The thing we need to focus on going forward is making sure that people understand that what we’re trying to do by default is hard. It involves constant change. It’s something that no one else has done, and the reason no one else has done it is because it’s hard and it takes a lot of change across a lot of industries.

What has been your proudest moment at Syapse?

When I started at Syapse the Philadelphia team worked, literally, in an attic. A super scrappy group of eight people. Everyone worked their tails off and the team grew and grew. Eventually we signed an amazing new office space, which I was visiting for the first time. I’d been super busy all morning and was late to our company all-hands meeting. I walked in the door to this new conference room and it was packed shoulder to shoulder with people. At that exact moment, it was an overwhelming feeling of, “Holy cow. We did that.” I was bursting with joy to see such a tangible incarnation of the time and effort and sweat and long nights to help this company through crazy growth since I’ve been here. Not just quantity-wise, but quality-wise, with some of the most decent human beings I’ve ever met in my life in that room. It was one of the very few moments as a recruiter you get to see the product of your work so tangibly.

What are you most excited for in the upcoming year?

What I’m most excited about is watching my two kids be hilarious together. I’ll come back to professional stuff — I just had a daughter, and I have a zany three-year-old son who’s my favorite person on planet Earth (besides my wife, if you’re reading this honey). My daughter is more reserved but my toddler can make her laugh just by looking at her. I’m looking forward to watching that continue. I don’t know what I did to deserve such amazing kids.

For Syapse, I’m really excited about our FDA partnership and supporting regulatory submissions for therapies like the one that saved my friend’s life. The idea of Syapse accelerating therapy development and helping open new clinical trial sites gives me the chills. It’s so tangible and so core to what we do. On the recruiting front, I’m excited to see growth continue. And I’m really excited to launch this employee spotlight project!

In a few words, why would somebody want to work at Syapse?

If you could become an expert in anything instantly, what would it be?

Flying a helicopter. One of the first things Keanu Reeves downloads in The Matrix is the flight program for an attack helicopter, been stuck on that since.

What are you “nerding out on” right now?

Syapse’s employer brand. Also, I’m reading 1491. We all remember from elementary school, “In 1492 Columbus sailed the ocean blue.” 1491 is a book on pre-Columbian Native American history.

If you could travel anywhere, where would you go?

If I could only go back to one place, I’d go back to Baja. That’s my happy place. Of the 190 countries I still have left on my list… I’m going to say Albania and Macedonia.

If you could switch roles at Syapse for a day, what other job would you like to try?

What’s your favorite tool in your workshop?

What’s your favorite restaurant to indulge in when you come to San Francisco?

Wow, “favorite” is a loaded word. There’s the ones that I go back to often, and then there’s the ones that are just special treats. Hakkasan is one restaurant everyone should treat themselves to. The one I go back to most often is Lao Table because they speak Laotian, one of my favorite countries to visit, and it’s wonderful to just hear the buzz and eat dinner at the bar when you’re traveling for business.