Senior Vice President of Strategy Alissa Winzeler-Cotton, Ph.D., found a perfect marriage of her molecular biology and healthcare consulting backgrounds at Syapse. Today, she leads a team of strategists in shaping the company’s core offerings and setting a vision for the future of Syapse. 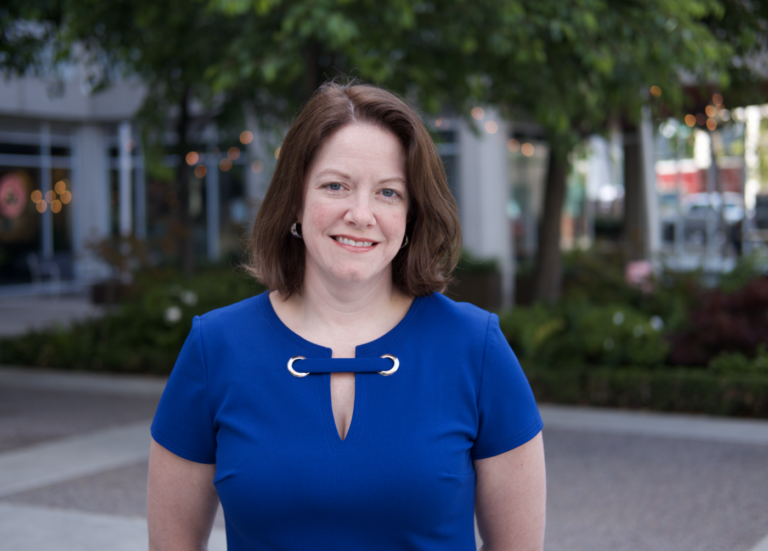 What brought you to Syapse?

I consider this my third career. I started off as a scientist and did my Ph.D. in Developmental Biology and Neurobiology at Stanford. I loved the problem-solving side of science, but I wanted to work with teams and do something that felt more meaningful to me personally in the actual day-to-day work. So I moved on to management consulting at McKinsey, where I focused on healthcare and working with providers at large health systems, very similar to the customers we work with at Syapse. I really loved the mission-driven orientation of healthcare providers, and I appreciated the opportunity to experience what it really means to deliver healthcare.

One thing that really struck me during my time consulting for these large health systems was how much unharnessed potential there was in the data that was routinely collected in the course of patient care. It felt like providers were only scratching the surface of what they could learn to improve patient care, if only they were able to integrate the information and ask the right questions.

I left consulting when I had my daughter, and as I thought about what I wanted to do next, my first instinct was to find a company that was improving patient care by turning all of that disparate data into meaningful insights. I spoke to a number of companies in several spaces, but didn’t really find the right fit. Then Syapse reached out to me.

When you join an early-stage company you want to make sure it has legs and that it really has the potential to be that next unicorn. The first role that we talked about wasn’t quite the right fit, but I was so intrigued by the company’s potential that we kept talking.

Eventually I talked to Ken [Tarkoff, CEO], who was just joining Syapse himself at the time, coming from RelayHealth within McKesson. He had grown RelayHealth from a small company into a larger one that got acquired by McKesson, and then continued to lead the company for years as it grew within McKesson. We basically had an hour-long conversation where he let me just ask him questions: How do you think about leadership? What did you learn at McKesson? What does it take to grow a small company into a large one? What are some challenges and lessons you’ve learned? I thought he had the right experience to make the company a success, and I was impressed by his thoughtfulness and transparency. So when we finally landed on the idea of creating a Strategy function at Syapse, it was an easy decision.

What started as an individual contributor role on the client side became the opportunity to lead a team and work directly with the CEO to help build a company and figure out all the adjacencies we can move into after establishing a strong foundation. So, in summary, what led me to choose Syapse was a combination of the company’s potential, the interesting problem space, the willingness to find the right application of my skills, and my confidence in the leadership.

Was there an ‘Aha!’ moment during the recruiting process when you knew you wanted to join Syapse?

It was two things. The first was the company in the most literal sense. When I heard what Syapse was doing I thought, “This is amazing!” When I was in grad school it was a bit mystifying to me how little of the nuance of what we were doing in the lab made it into clinical practice. Historically, the focus of a lot of drug development has been to just take a whole array of small molecules and throw them at things and see what works. You’d be shocked at how little we know about the molecular mechanisms underlying many of the drugs we use every day. Now we’ve mostly exhausted that trove of initial small molecules and researchers need to be more directive and thoughtful about how they develop therapies. Being able to bridge that gap and leverage real-world data to support better therapies and bring data into clinical care — in a molecularly-driven way, which is my background — I knew I wanted to talk to Syapse.

The second was what I mentioned earlier, the process of aligning on the job description. Even though the first role wasn’t the right fit, we kept talking and talking to figure it out and that continued conversation was great. Once we landed on the right strategic function it was easy to say “yes”.

When you’re talking to friends and family about what you do at Syapse, how do you explain your role?

I describe it as a deeply embedded consulting team within Syapse. We have a number of portfolio projects that we work on, from partnership strategy to data strategy to customer success, as well as corporate strategy (talking to the board and investors), and the Syapse Precision Medicine Council. A lot of big companies have strategy teams that focus exclusively on the 5-year plan and making big deals. We do some of that, but we spend most of our time on the things that are going to make the company successful in a much shorter time frame.

In a company of this size, stage, and market potential, things move incredibly quickly. We are constantly pushing the envelope and working on things that haven’t been done before. So there’s a lot of “figuring things out” that needs to happen in the here and now, across a variety of areas. I have been lucky enough to hire some incredible, versatile people. We figure out the places we need to go, that nobody in the organization owns yet because we’re a growing company and everyone already has plenty of work to do. In many cases, we fill that gap and own it until we can hand it off to a natural owner. So we end up being involved in a ton of things you might not think we’d be involved in.

What’s an example of a project you and your team are working on?

Where to start? Some of our primary projects involve shaping our core offerings. For example, through our health systems working group we’re getting input from oncologists on how we turn the data we ingest in our platform into the most meaningful clinical insights. We might start with understanding the rules for deciding when a therapy starts and stops, and then look at how time on therapy relates to progression-free survival periods. There are a lot of clinical rules to apply to make sure that a computer algorithm can model something that’s actually reflective of the clinical benefit of a therapy.

The end goal — the “Holy Grail” — is to be able to leverage real-world evidence to understand which therapies have the greatest benefit for very specific patient populations, and use that to improve the care that is delivered. That’s why we’ve pulled together both the working group and a cross-functional internal team of stakeholders — at least eight or nine different functions are all collaborating on this — to push this real-world outcomes work forward.

What has surprised you since joining Syapse?

I think what has surprised me the most is that I feel like I’ve finally hit my sweet spot in terms of what I like to do. I’ve always been mission-driven in the big picture sense, but what I realized in grad school is that for my own personal happiness, it also really matters what I’m doing every day and whether I can feel the impact of what I’m doing. Now I’m working for this growth stage company where the mission is actually super important and I’m doing something that’s big enough to really make a difference in the mission. The company isn’t so small that all your focus is on just trying to survive, but it’s small enough that what you do every day matters. The impact is real.

What are you most excited for in the upcoming year?

I’m excited for a lot of the groundwork that we’ve been laying to really come to fruition. We’re launching some new products soon that will allow people to learn from real data in a meaningful way. We’ve been previewing them with health system and life sciences stakeholders and the reception has been overwhelmingly positive! The ability to deliver insights is so powerful but it’s super hard to do under the hood, so seeing that come together is exciting.

One thing I make sure to emphasize when I’m talking to candidates is the enormous opportunity we’re sitting on. If we can get this right, it’s game-changing. It’s important to realize that it’s supposed to be hard; we’re trying to do something that really hasn’t been done before, in a way that’s different from what has already been attempted by other players in the space. If it wasn’t hard, then somebody would have already done it, and it wouldn’t be as meaningful or valuable because it would already be a solved problem. I’m not interested in working on solved problems. I want to make a difference, and making a difference means you have to chip away at stuff that hasn’t been done before. It’s easy to get caught up in how hard it is. You have to make sure you don’t forget that you signed up for a hard thing, because it’s something that’s worth the effort.

You know, Ken [Tarkoff, CEO] and I were recently talking about the movie The Martian. I always end up watching it when I’m on a plane, so I’ve seen it like, eight times. I love it because the main character has this impossibly hard problem that he breaks up into pieces. He’s stranded on Mars and has to get back to Earth. But if you focus on the overwhelming problem of getting back to Earth, it seems unsolvable. So he breaks it up into chunks — find a food source, fix some equipment, get this done, get that done. By the end of it, he’s figured out how to survive, communicate with NASA, and get himself home. I think there are a lot of parallels in terms of how we approach what we do at Syapse. We have to have a strong sense of where we want to go to make sure we focus on the right problems first. If we chip away and solve those “little” problems one by one, we’ll get those right and eventually solve some of the biggest challenges in precision medicine.

If you could become an expert in anything instantly, what would it be?

How to raise a three-year-old…

The nuances of Kaplan-Meier survival curves for outcomes research.

If you could travel anywhere, where would you go?

The next big trip I want to do is a safari in Africa. I went once and loved it, but I was eight. So I’d like to go back, maybe to South Africa.

If you could switch roles at Syapse for a day, what other job would you like to try?

We’re assuming I don’t have to “hold down the fort” and I can just use it as an opportunity to learn, right? If so, then probably Mike Italia [VP, Product Development]. I would love to get a deeper understanding of the engineering side of the house, and it would be great to get to know the Philly office even better.

What’s your favorite snack in the office kitchen?

There are a bunch of great snacks that I try to avoid! I generally stick with Quest Bars.